Fans of Rammstein and Dark should not get too excited here. This movie is in a class of it’s own. And that class is about zombie teenagers trying to get laid. I never thought I’d be typing these words together ON PURPOSE but Night of the Living Dorks is a Teen Horror Sex Comedy. Upon finishing the film the best description I could come up with was “It’s cute!”

While this is way more teen movie than horror, fans of zombie comedy should definitely check it out.

Where I found it: This film was part of another reviewer’s massive DVD collection. She loaned it to me months ago and made me sit through it so she could have the DVD back. She twisted my arm. Really. That happened.

Points of interest:
Germans make Hitler jokes. I always wondered if it was still “too soon”…
There was also a gym teach named Stalin and Friedrich Nietzsche Gymnasium. 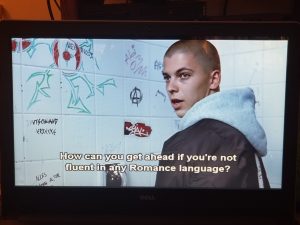 Second Favorite Line:
Stalin: Performance like that would have lost us the war!
Dork: But we DID lose the war!